In this tutorial, we survey a few advanced topics, including how the QSA algorithm you implemented can be extended to provide the user with an easier-to-use interface, and how to create Seldonian reinforcement learning algorithms. For simplicity, on this page we often assume that there is a single behavioral constraint and drop the \(i\)-subscripts on \(g_i\) and \(\delta_i\).

Consider the diabetes treatment example we described in our paper. In that example, we required the user of the algorithm to be able to label outcomes in the data as containing undesirable behavior or not (containing hypoglycemia or not). This type of interface is a particularly simple extension of QSA: labeling data as containing undesirable outcomes corresponds to the user providing the necessary values of \(\hat g\).

where \(U\) is the event that an undesirable outcome occurs. Substituting this definition into the definition of the behavioral constraint, we have that: $$ \Pr\left ( \Pr(U|a(D)) \leq \Pr(U|\theta_\text{cur}) \right ) \geq 1-\delta. $$ This behavioral constraint ensures that the probability that the algorithm will return a new solution that increases the probability of the undesirable outcome (compared to the current solution) will be at most \(\delta\).

Giguere's interface replaces the function \(\hat g\) with multiple functions, \(\hat z_1, \hat z_2,\dotsc,\hat z_k\), for some integer \(k\). Each of these functions is like \(\hat g\), but instead of providing unbiased estimates of \(g\), they provide unbiased estimates of other parameters \(z_1,z_2,\dotsc,z_k\), called base variables. More formally, for all \(i \in \{1,2,\dotsc,n\}\) and all \(j \in \{1,2,\dotsc,k\}\), \(z_i(\theta) = \mathbf{E}[\hat z_{i,j}(\theta,D)]\). For example, for the GPA-regression problem, base variables might include the MSE of the estimator, the MSE of the estimator for female applications, the mean over-prediction for male applicationts, etc. For the GPA-classification problem, base variables might include the false positive rate and the false negative rate given that the applicant is male.

Consider an example where the user typed the following behavioral constraint: \(g(\theta)\)= |MSE_Male - MSE_Female| - 1. Here, MSE_Male and MSE_Female correspond to two base variables that we pre-specify and provide to the user—more generally, we could condition also on different state features, such as race, ethnicity, or other features. This would parse into the following tree: 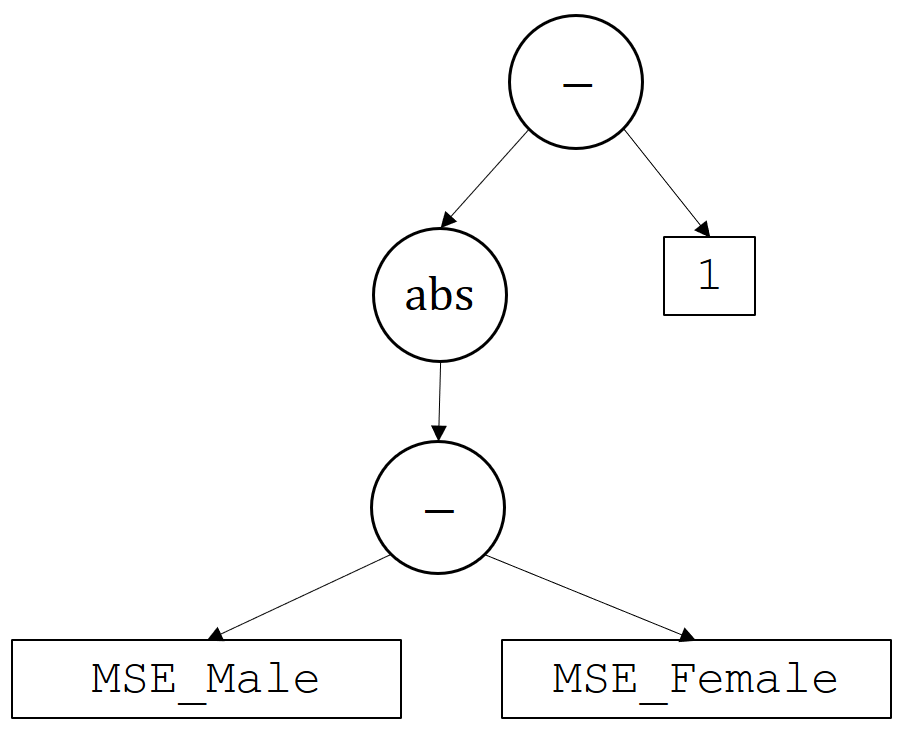 Recall that the base variables MSE_Male and MSE_Female are ones that we have already built in by defining their corresponding unbiased estimators, \(\hat z\). Hence, just as we bounded \(g\) using \(\hat g\), we can bound \(z\) using \(\hat z\). This results in high-confidence bounds on both base variables. In this case we can automatically detect, by analyzing the parse tree, that we will need two-sided bounds (both upper and lower on these base variables). The image below depicts how the confidence intervals on the base variabes (and the constant 1, which can also be viewed as a base variable) are propagated through the tree to get a high-confidence upper bound on \(g(\theta)\). 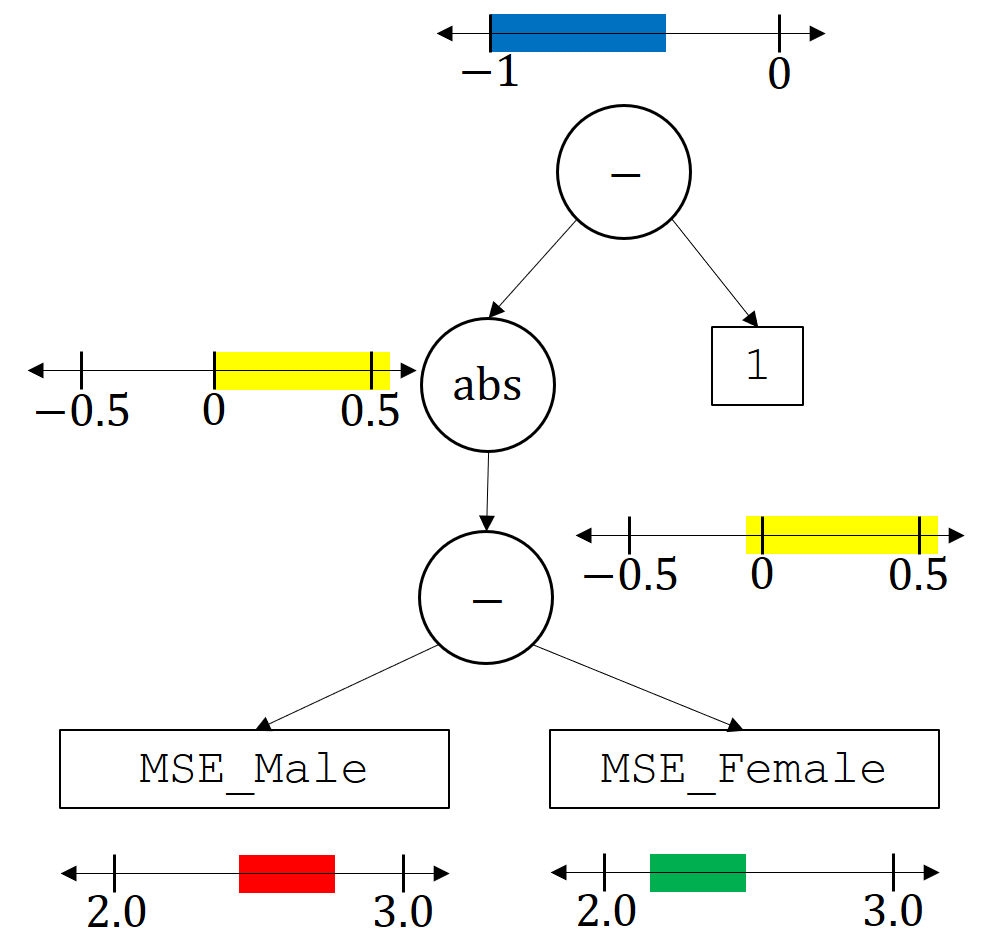 This interface can be further extended by allowing the user to provide unbiased estimators for other base variables that we didn't already think ahead to include, and by allowing the user to provide base variables for which they can compute confidence intervals given data, perhaps without constructing unbiased estimates (for an example, see Appendix G of our NeurIPS paper).

Extending QSA to the classification setting is straightforward. However, extending it to the reinforcement learning setting is slightly more challenging. In the regression and classification settings (both forms of supervised learning), we can easily estimate quantities like the mean squared error and false positive rates of a solution, \(\theta\), given data. We simply apply the solution to the data and compute the sample mean squared error or sample false positive rate. However, in the reinforcement learning setting we cannot "apply the solution to the data," since the choice of solution changes the distribution of data that would be generated.

In reinforcement learning, the problem of predicting what would happen if one solution (a policy) was used given data generated by a different solution (a different policy) is called off-policy evaluation or off-policy policy evaluation. The problem of obtaining confidence intervals around these predictions is called high-confidence off-policy policy evaluation (HCOPE). At the core of current Seldonian reinforcement learning algorithms are HCOPE algorithms that allow for high-confidence guarantees that the policy will only be changed when it is an improvement with respect to one or more reward functions (where reward functions could, for example, be labels on trajectories indicating whether an undesirable outcome occurred).

A complete review of HCOPE methods and reinforcement learning is beyond the scope of this tutorial. However, we refer the reader to the following sequence of papers, in order: 1, 2, 3, 4, 5, and 6. While there are many other fantastic papers in this area, these six provide a strong introduction.

The QSA algorithm that you have created, with the extention to reinforcement learning and the interface extentions listed above, is the current state-of-the-art in Seldonian algorithms. However, as you have seen, this algorithm is built from simple components and handles open problems with engineering hacks. This means that the field is wide open, waiting for your improved algorithms. Here we list some interesting open problems.

Hopefully you see the simplicity of the algorithms that we have presented so far, and ways in which they might be improved. Your improvements could enable Seldonian algorithms to operate using less data, or could provide users with improved interfaces. In either case, we hope that they will enable the responsible application of machine learning to future problems.