Intelligent machines using artificial intelligence (AI) and machine learning (ML) techniques are becoming increasingly common. They enable self-driving cars[1] and influence decisions including who should receive a loan,[2] who will get a job,[3] how long people will spend in prison,[4] and which treatments a patient will receive when in the intensive care unit.[5] Ensuring that these intelligent machines are well-behaved—that they do not, for example, harm humans or act in a racist or sexist way—is therefore not a hypothetical problem to be dealt with in science fiction movies or the distant future, but a pressing one that the research community has begun to address,[6] and which we tackle in our report recently published in Science.[7]

We propose a new framework for designing ML algorithms. This new framework shifts the burden of ensuring that ML systems are well-behaved from the user of the algorithm to the designer of the algorithm, typically an ML researcher. Our framework has three steps, described in detail in our paper and its supplementary materials.[7] Algorithms designed using our framework are called Seldonian after the eponymous character in Asimov's Foundation series. Here, we highlight three of the key properties of our framework:

The diagram below depicts the process of designing and using Seldonian algorithms. 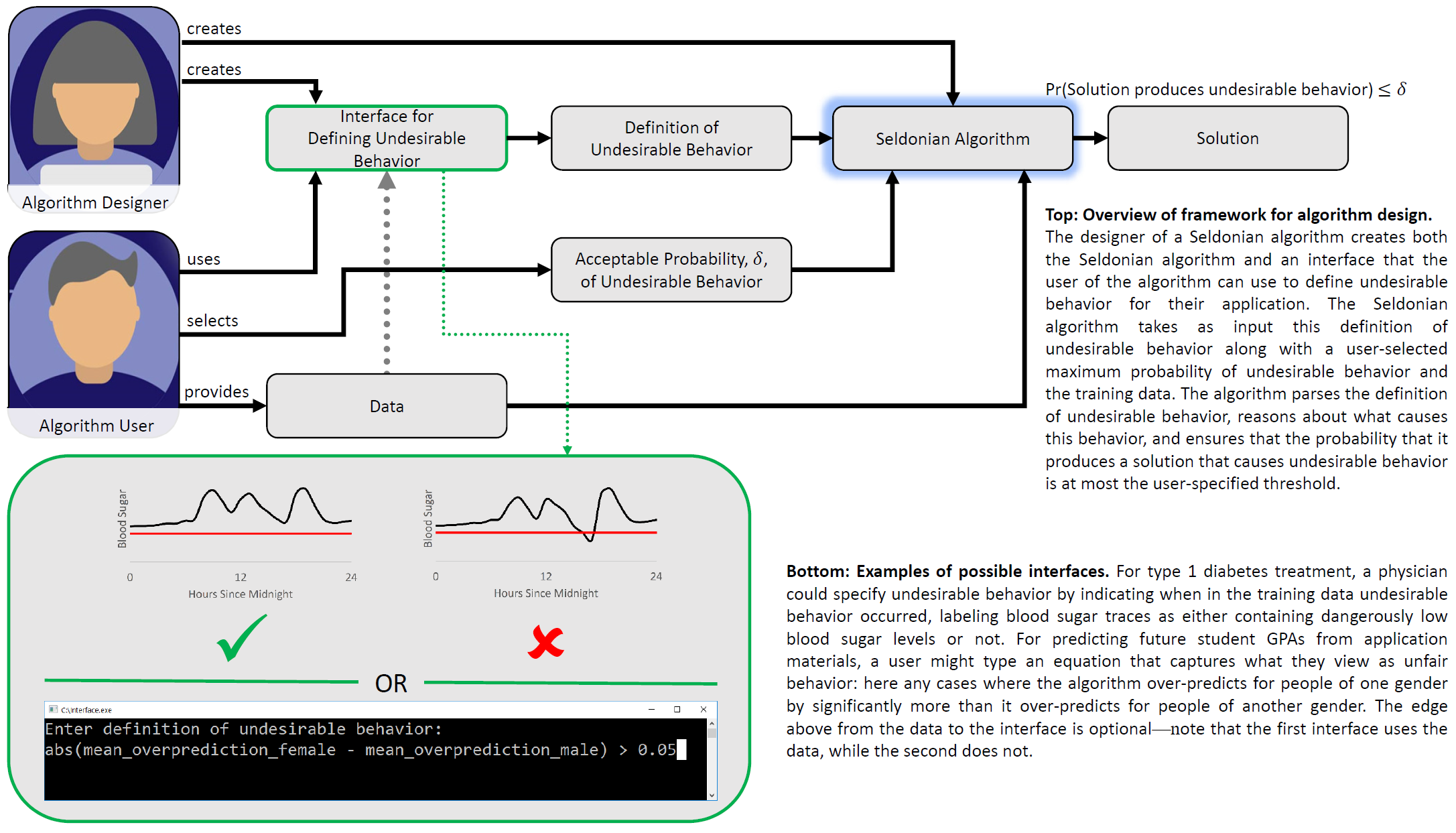 Consider the problem of predicting student GPAs during the first three semesters at university based on their entrance exam scores. A system capable of providing accurate predictions could be used to filter student applications, much like automated systems for filtering resumes of job applicants.[13] To study this problem, we applied three standard ML algorithms to data from 43,303 students. The three standard algorithms use least squares linear regression (LR), an artificial neural network (ANN), and a random forest (RF). The plot below shows the behavior of these algorithms when predicting student GPAs: 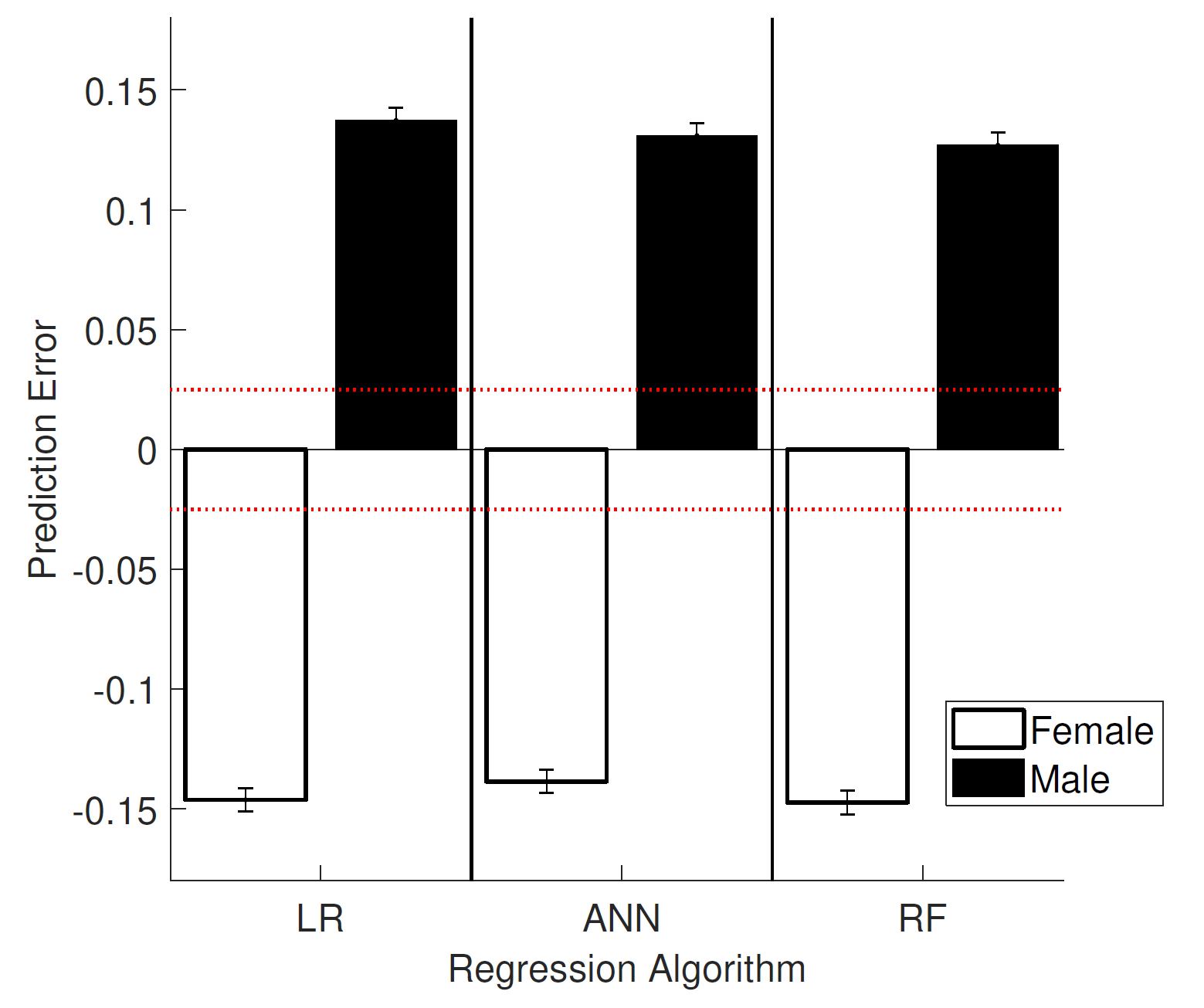 The height of each bar is the mean prediction error (how much each algorithm over-predicts, on average) for either male or female students. Since GPAs are on a 4.0 scale, this difference in mean prediction errors of approximately 0.3 GPA points corresponds to significant discrimination against female students. In the supplementary materials of our paper we describe the many reasons that this type of unfair behavior can occur. We conclude that there are many possible reasons, and that expecting the user of an ML algorithm to properly identify and remedy the cause of unfair behavior would be unreasonable.

By contrast, Seldonian algorithms can automatically identify and remedy the causes of unfair behavior in this example. In the following plot we include two variants of a Seldonian algorithm that we designed. This algorithm was tasked with ensuring that the difference between the mean prediction errors for male and female students was no more than \(\epsilon=0.05\), which they achieved succesfully (with \(1-\delta=0.95\), our algorithms never returned No Solution Found): 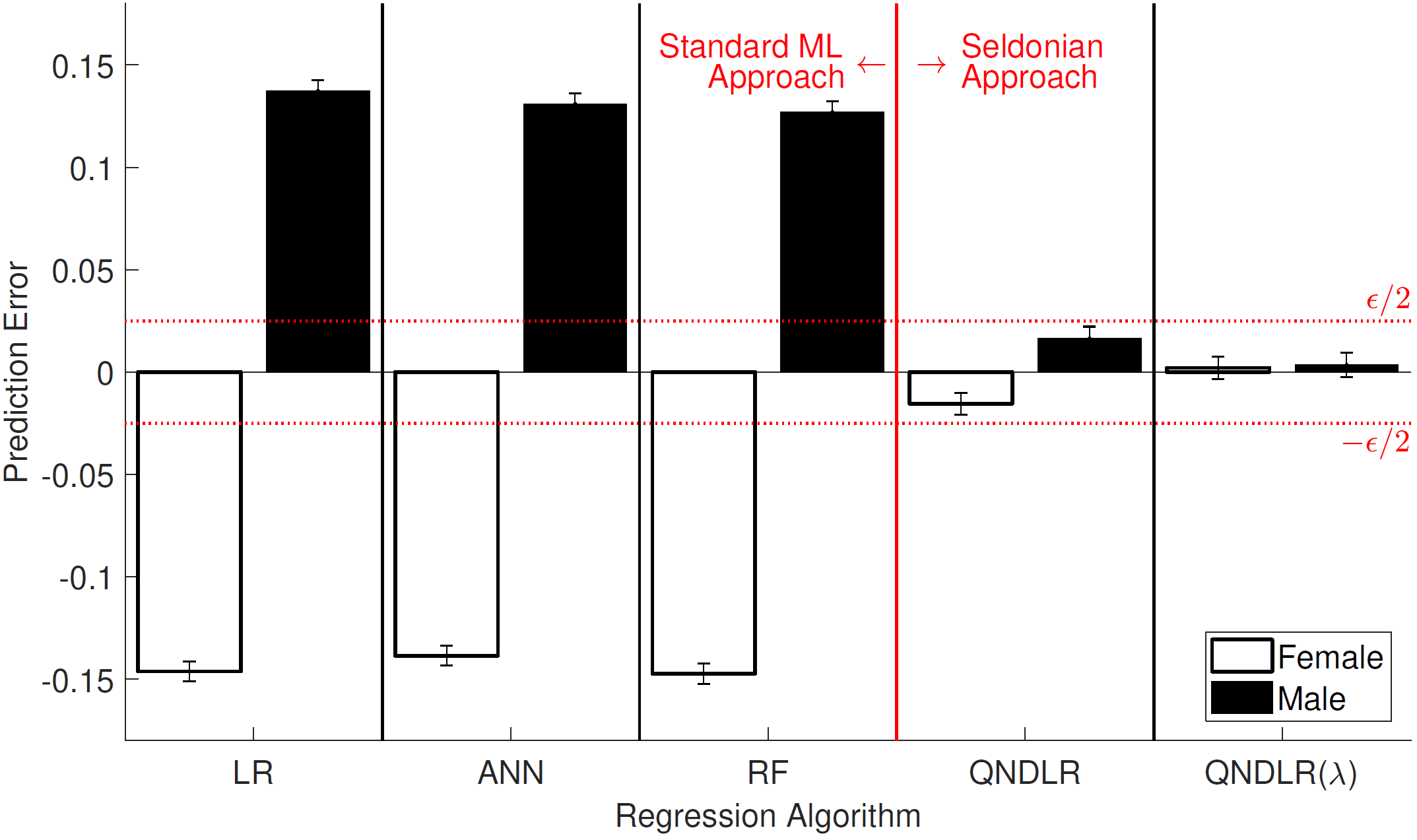 In ML fairness research, many different definitions of fairness have been proposed (this video describes 21). What if the user of the algorithm's definition of unfair behavior differs from the one that we used above? For example, what if the user wants to ensure that the mean predictions are similar for male and female applicants, not necessarily the mean prediction errors? That is, what if someone wants the algorithm to make the same prediction, on average, for men and women? This is where the interface becomes important.

To show that Seldonian algorithms with flexible interfaces can be developed, we created a Seldonian classification algorithm and used it to predict whether or not a student's GPA will be above 3.0. Unlike predicting the GPA directly, this yes/no type of decision is compatible with many of the previously mentioned 21 definitions of fairness. The Seldonian algorithm's interface allows the user of the algorithm to type an equation that characterizes unfair behavior. This equation can include several common variables, like the false positive rate (FP), false negative rate (FN), true positive rate (TP), true negative rate (TN), false positive rate given that the student is male (FP[male]), etc. Using an interface of this type, the user might enter:
| FN[male] - FN[female] | \(\leq\) 0.1
to indicate that the difference between the false negative rates for male and female applicants should be at most 0.1, or
max(FN[male]/FN[female],FN[female]/FN[male]) < 1.1
to indicate that the ratio of false negative rates should be within ten percent of each other. Rather than make up our own definitions of fairness, in our paper we applied a Seldonian algorithm with an interface of this type to enforce five common definitions of fairness in the ML literature: disparate impact, demographic parity, equal opportunity, equalized odds, and predictive equality. We compared the performance of our algorithms to two state-of-the-art fairness-aware ML algorithms.

Also, in work that is to-appear at the conference Advances in Neural Information Processing Systems (NeurIPS) in December 2019, we show how similar algorithms (a special type of ML algorithm called a contextual bandit algorithm) can avoid unfair behavior when predicting whether someone will repay a loan, predicting whether someone will commit a crime in the future, and when automatically improving an online tutorial (an intelligent tutoring system), all using real data.

Seldonian algorithms are for more than just ensuring fairness: they are for avoiding all types of undesirable behaviors. To show this, and to provide an example of an interface that does not require knowledge about statistics, consider the problem of automatically improving a controller within an insulin pump—a bolus insulin calculator. Bolus insulin calculators determine how much insulin should be injected into the blood of a person with type 1 diabetes before they eat a meal. If too much is injected, blood sugar levels can become dangerously low—a condition called hypoglycemia. If too little is injected, then the person's blood sugar levels can remain too high—a condition called hyperglycemia. The ideal amount to inject depends on the individual, and so there has been recent interest in creating bolus calculators that can adapt to the metabolism of an individual. Reinforcement learning algorithms are a type of ML algorithm that are well-suited to this type of problem.[13]

For this application, a medical researcher using a reinforcement learning algorithm might know that they want to enforce a safety constraint that ensures that the frequency of hypoglycemia is not increased, since hypoglycemia is generally considered to be more severe than hyperglycemia. However, the user may not know all of the intricate details of an individual's metabolism, and so they cannot know which settings of a bolus calculator would increase the frequency of hypoglycemia for the individual, and which would not. 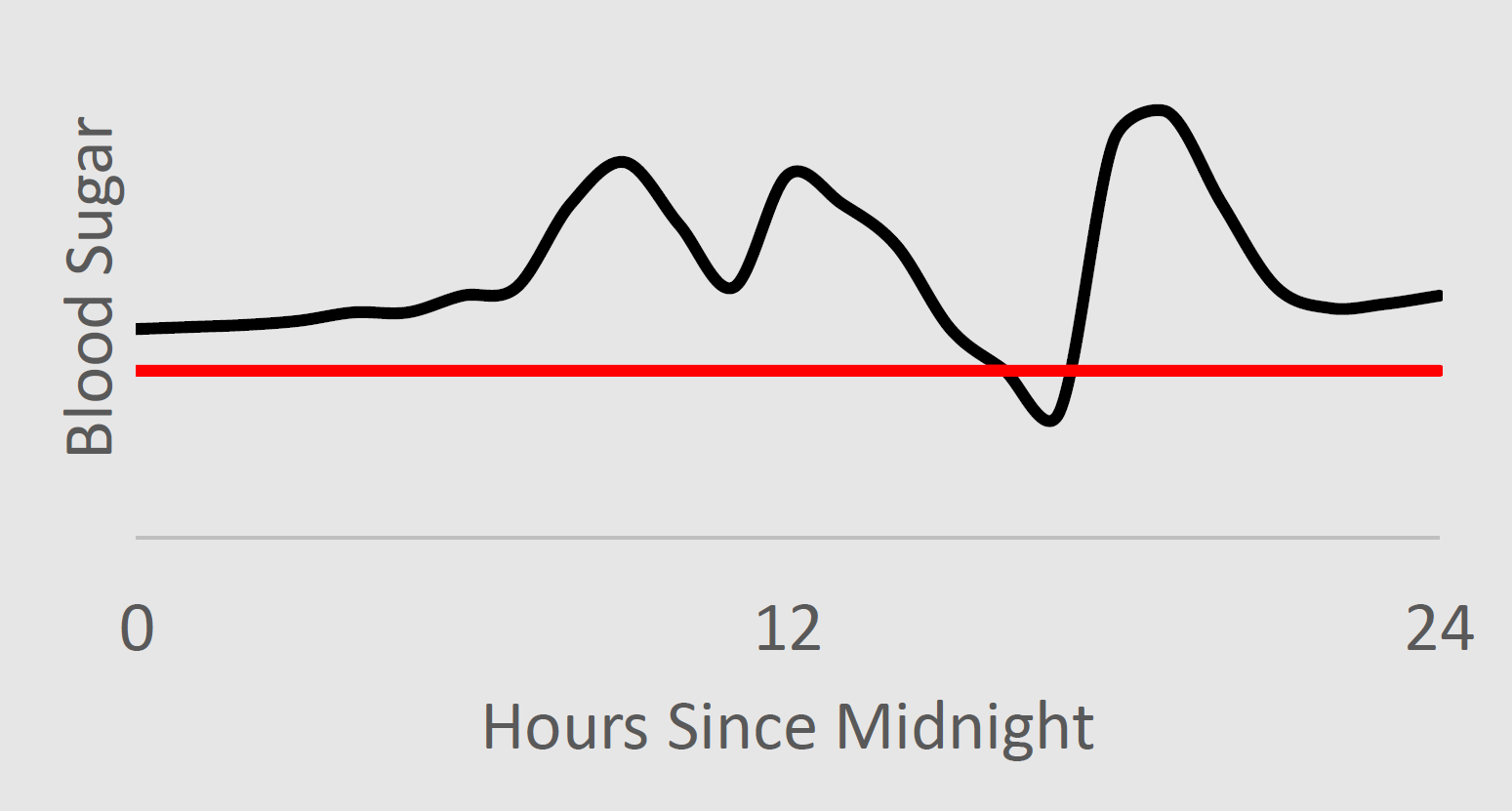 Current State of the Art